We first commented on China’s new income inequality plan back in November when there was still a bit of skepticism over whether it would be released at all (it has been in the works since 2004). The initial outline of the plan was released this week in a notice (CN) by the State Council. The report begins with an admission that income inequality, the gap between urban and rural areas, and illegal/grey income have all emerged as significant issues in China. This comes just after last month’s release of annual gini coefficient numbers back to 2003 by the National Bureau of Statistics. The numbers show that inequality in China is worse than in Russia and the United States and roughly on par with Nigeria and Mexico. 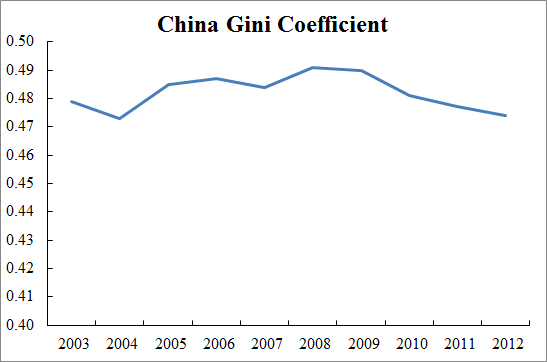 So what’s in this new income inequality reform plan and is it significant? The plan itself is relatively lengthy, listing thirty-five different goals and targets for addressing income inequality. The ones that stand out are as follows:

Doubling personal income levels by 2020 emerged last year as one of the leadership’s new goals. Many have pointed out that at current growth rates incomes were set to double anyway. While true, what’s actually important in this statement is shifting the goal away from headline GDP growth towards a focus on boosting living standards. The inclusion of this within the new income inequality plan is a reaffirmation of the new emphasis on quality over quantity economic growth.

State-owned enterprises (SOEs) are not the primary driver of income inequality in China, but they are probably the least popular. The new plan outlines a series of guidelines to limit excessive salaries in the state sector. The report also mentions a new emphasis on cracking down on grey and illegal income received by state-owned enterprise employees.

Increasing the Return on Financial Assets for Households

The plan identifies higher dividend payments by listed companies and better shareholder protections as a way to boost the incomes of households. Importantly, the plan also puts forward interest rate liberalization, specifically allowing more flexibility for deposit and loan rates, as a way to boost household income from financial assets.

The plan calls for changes to tax policy, social safety net programs, and transfers to address income inequality. The plan identifies several specific reforms, including increasing the participation of migrant workers in the pension system, improving the urban and rural pension systems and accelerating the establishment of a national universal healthcare system.

Currently limited to only a few cities, the plan includes an expansion of the individual property tax. This would be a welcome step towards reducing speculation in the housing market.

The plan highlights the importance of protecting the rights of rural land owners and improving the land registration system as important step for boosting the incomes of rural citizens. According to the plan, land requisition should be based on the principle of voluntary agreements. This would be a stark change from the myriad of land seizures that have taken place during China’s urbanization drive.

The new income inequality plan is a step in the right direction. Many of the issues identified in the report are desperately in need of reform. The inclusion of interest rate liberalization as a necessary reform to improve income equality is a hopeful sign that policymakers understand that the issue has deep roots in the country’s distorted economic model. As always, the key here is implementation. Without a series of follow up directives with more details, many of these policies are unlikely to be fully implemented.