China’s current account surplus as a percent of GDP remained steady in 2014 at just over 2 percent (China’s GDP in 2014 was $10.3 trillion at the market exchange rate).  This is in line with what international observers feel is acceptable bounds, less than 3 percent of GDP.  Its trade surplus rose slightly to 2.7 percent of GDP, reflecting huge increases in the goods trade surplus as well as its service trade deficit.

Exhibit 1: China’s Current Account and Trade Surplus as % of GDP

Net income and net transfers were each around a $30 billion deficit, bringing the dollar figure for the current account to $213 billion.  If China’s outward FDI rises relative to inward FDI we would expect the net income deficit to shrink, as a Chinese multinational’s profits from abroad are counted as a credit in the current account, this could push the overall current account surplus higher. 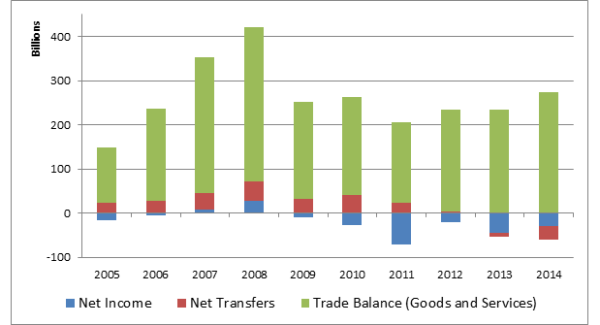 Breaking Down the Trade Balance

The really astounding number is figure was China’s merchandise trade surplus of $471 billion, an increase of over $100 billion from 2013.  China totaled $2.35 trillion in goods exports, and $1.88 trillion in imports.  Merchandise exports rose by 6 percent from 2013 and imports rose 1.2 percent. 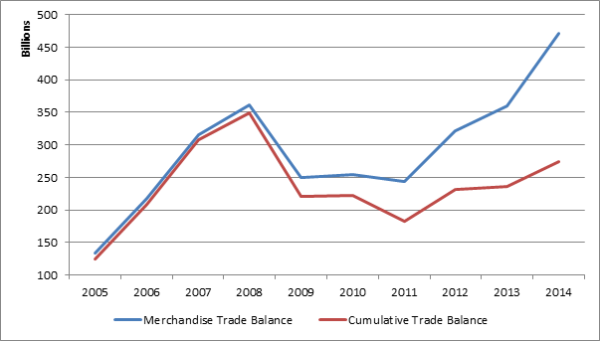 Certainly a big factor in the lower figure for imports is the terms of trade.  While China may be importing more of certain commodities (by volume), the price of commodities like oil and iron ore have plummeted and therefore the value of China’s imports drops.  But weak domestic demand for foreign products is also to blame.  With this in mind, we expect the trade surplus to widen in 2015. 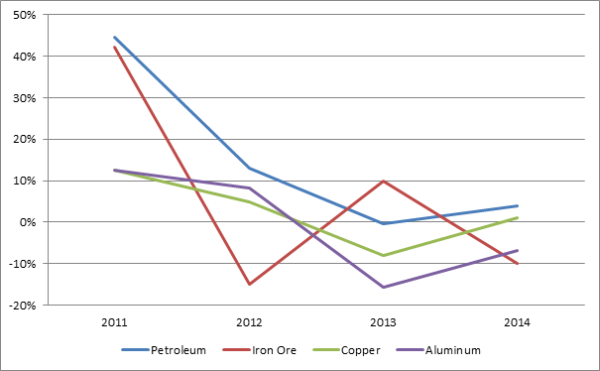 Another surprising factor was China’s big increase in service trade deficit - around $200 billion or 60 percent greater than in 2013 - this brought China’s cumulative trade surplus down from the rafters to $273 billion.  Due to a lack of development in its domestic service sector, China’s expanding economy will need ever more service imports in order to help improve productivity, so we expect the deficit in services to continue to grow.

Bilateral Trade with the United States

China’s large current account surplus and huge foreign exchange stockpile give it a big foundation with which to prop up the economy in the event of any economic surprises.  However, China’s capital and financial account deficit was $96 billion in 2014.  What to watch for is the RMB, because as GDP growth falls, and as the property market and heavy industry continue to struggle, the leaders may look for new places to create a stimulus, as they did when they cut the reserve requirement ratio (RRR) for banks on February 4th.  The RMB has risen with the dollar compared to the currencies of China’s emerging market trading partners, so if exports start to ease up, many expect the RMB to depreciate further against the dollar.  The RRR cut will also put depreciative pressure on the RMB as interest rates drop.  A depreciating RMB should increase exports, but they may also slow imports, increasing the trade surplus, which could push the current account past 3 percent of GDP.

[i] Using value added data, the OECD calculated that in 2009, the US bilateral deficit with China could be as much as one-third less.  See http://www.oecd.org/sti/ind/measuringtradeinvalue-addedanoecd-wtojointin...

A very concise and useful presentation. One unanswered question is what is the character of the merchandise being exported. Is it of products designed and created in China, or is it merchandise that was designed elsewhere and for which the manufacturing and/or assembly was outsourced to China. Obviously both but what are the proportions, one might wonder.