Is China Unwinding its Foreign Exchange Reserves? Not Just Yet

Last week, the PBoC released data on its third quarter foreign exchange reserve accumulation. The headline data showed a decline of $105 billion, the first decline in headline reserves since the second quarter of 2012. This has led many to question whether China is experiencing a large capital outflow, or whether China is starting to sell their large holdings of US debt. However, if the change in reserves is adjusted for movements in the major reserve currencies, the change in reserves is flat. Exhibit 1 shows the monthly rolling 3-month change in headline reserves versus the figure adjusted for currency movements. While reserve accumulation has certainly slowed this year, especially relative to last year’s record levels, it shows that it is too early to believe that China has begun unwinding its foreign exchange portfolio. 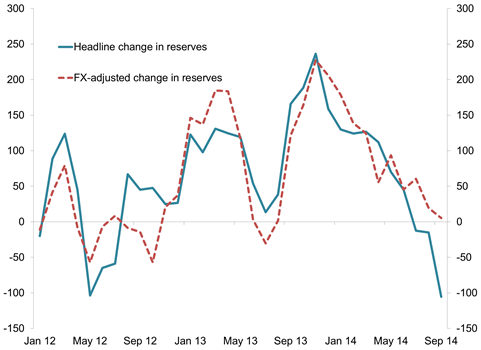 Why adjust for currency movements? The PBoC reports its holdings of foreign reserves at face value, and in US dollars. Therefore, if they make no change in their portfolio, but the foreign exchange value of the non-USD portion has changed (which is substantial and growing, as we’ve shown previously), then the headline value of reserves will show a decline. As the illustrative table below shows, this can be misinterpreted as a change in actual holdings. For the portfolio allocation, we use the value-weighted COFER share as a proxy. However, as we have shown previously, there is reason to believe that China’s holdings of European and Japanese securities are larger than indicated by the COFER data. If so, the adjustment in the headline forex data would show a slightly larger (but still well within the directional margin of error) increase in the 3rd quarter. It should be noted that FX-adjustments are only really useful when looking at the flow of reserves.

Exhibit 2: Illustrative Example of the Portfolio Impact of Currency Movements

This is further corroborated by data released by the TIC survey last week. It showed that China’s holdings of US securities in the first half of this year increased by a de minimis $8 billion – very small relative to the $1.8 trillion of total holdings. Given that China’s overall economic growth is slowing and the trade balance was strong in the 3rd quarter, it would seem that there would be pressure to intervene. However, the RMB has been gradually appreciating with relatively healthy levels of volatility and reserves are basically flat. This is a positive sign of restraint from the authorities.