Are Chinese Interest Rates Too High?

A recent Financial Times op-ed argued provocatively that, contrary to the belief of many economists, Chinese interest rates are too high rather than too low. It’s worth delving into these arguments more deeply given that this contrarian viewpoint seems to be gaining a bit of traction. Specifically, the article argues:

“A cursory comparison of interest rates across countries suggests China’s deposit rates are not too low.” In fact, its deposit rates of 3-4 percent are much higher than those of most leading advanced economies, whose rates are about 0.2 to 0.5 percent. They are also higher than those of most developing East Asian countries, especially after adjusting for inflation and exchange rate risks. “

The fact that deposit interest rates in a rapidly growing economy like China are higher than the advanced economies should not be surprising. Most of the advanced economies are undergoing periods of stagnant growth and have central banks implementing expansionary monetary policies. These factors have driven down deposit rates in countries like the United States to record lows.

Are Chinese interest rates significantly higher than most developing East Asian countries? If we look at the most recent three year period for which we have data for all countries (2010-2012), only Thailand has had lower rates than China. The Philippines, Indonesia, Malaysia, and Vietnam have had higher deposit rates over this period. With respect to lending rates, rates in China are significantly lower than most of its East Asian peers, with the exception of Vietnam.

These trends also hold over a multi-decade period. The charts show that with the exception of Vietnam, which is an outlier on lending rates, China has had significantly lower deposit and lending rates for more than two decades. 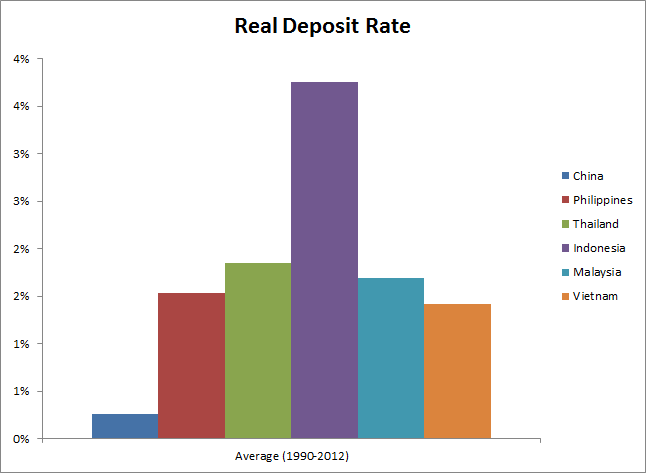 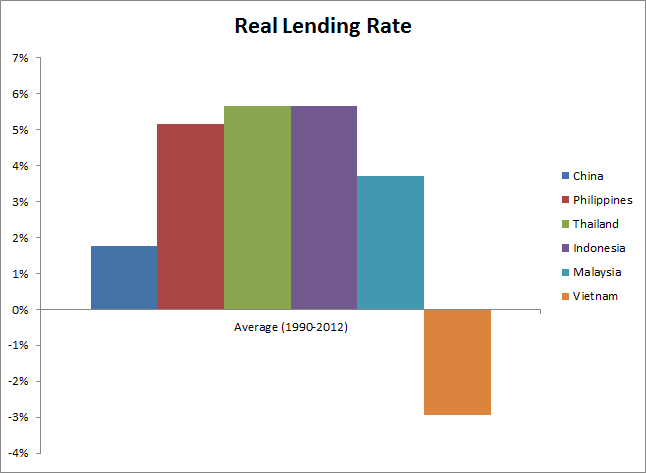 There is no denying that Chinese interest rates have been exceptionally low for a long period of time compared to its closest economic peers. To argue, as the FT op-ed does, that this extended period of very cheap capital has had little to do with “shaping long-term investment decisions” seems highly improbable. On the contrary, China’s high levels of investment are closely tied to a policy of financial repression that pushes deposit rates into negative territory and thereby correspondingly lowers the lending rate.

The author acknowledges that removing interest rate controls would lead to rate increases in the near term. The closest substitute for deposits, short-term wealth management products, and Alibaba’s Yu’E Bao funds, are often offering rates twice as high as the equivalent time deposit. If the rate ceilings were lifted, deposit interest rates would quickly converge to the more market-based rates.

Later in the article the author posits the following scenario:

“Hypothetically, what would be the level of interest rates if state and private banks competed on equal terms and China opened up its capital markets? If capital controls were eliminated, more creditworthy borrowers would begin borrowing abroad at lower rates than available domestically, buoyed in part by limited downside exchange risks. Interest rate arbitrage is already occurring as Chinese companies use their overseas affiliates to gain access to cheaper external funds. Similarly, foreign capital would be attracted to an even greater extent into China, enticed by the higher deposit rates. This would put pressure on both lending and savings interest rates to fall to levels in Europe and the US, and on the renminbi to appreciate.”

There are a couple things wrong with this conclusion. First, many creditworthy borrowers in China already have access to foreign lenders via offshore borrowing in financial centers like Hong Kong. Were capital controls to disappear, this would undoubtedly increase somewhat, but the exact amount is unknowable. Second, the author assumes in this scenario that the new capital flows from China would be inward as foreign capital pours into China seeking higher rates. This ignores the other side of the equation, which involves a diversification of assets held by Chinese savers. Long kept penned within the country by capital controls, Chinese investors have very little international exposure in their portfolios. The relaxation of capital controls will inevitably involve a large degree of portfolio diversification into international assets.

The literature on whether inflows or outflows would dominate offers mixed conclusions. The IMF itself has published working papers with different conclusions on the subject, depending on what assumptions are made. The only thing that’s clear is the outcome of liberalization on capital flows is unclear. Therefore, it’s hasty to declare that opening the Chinese capital account would inevitably lead to lower interest rates.

Finally, the article offers the following appeal to economic theory as a justification for overvalued interest rates:

“Put another way, China is unusual in that its ratio of investment to GDP is exceptionally high but its saving ratio is even higher. The surplus in savings shows up as a trade surplus, which is then invested abroad by the central bank. According to the most basic economic principle, the equilibrium interest rate is that rate which equalizes savings and investment. In the absence of institutional reforms, interest rates would have to fall to generate a decline in savings or an increase in investment until balance is achieved.”

The mistaken assumption here is that market-determined interest rates always adjust to bring the current account into balance. As international experience shows, current account surpluses and deficits can persist for extended periods of time in market economies.  The trade accounts of major economies are in perfect balance precisely zero percent of the time.  Moreover, interest rate differentials between countries continue for long periods without being forced into equilibrium. Even if one assumes that an equilibrium will eventually emerge, it is equally plausible that the savings rate will fall rather than investment increasing. The IMF and many others have long argued that China's extraordinarily high household savings rate is driven by precautionary saving, something higher interest rates would help to alleviate.

As the author of the FT article, my focus is on current interest rates - not what they were over the past decade. Currently, China's one year deposit rate is 3.25, rates in Hong Kong and Singapore are around 0.2-0.5; in Taiwan 1.2. The ASEAN developing countries have deposit rates range from 1.2 in the Philippines to 3.1 in Malaysia. Source: Asia.Deposit.com Adjusted for inflation and exchange rate risks, China's deposit rate seems high not low. In an equilibrium, the interest rate is supposed to equilibrate savings with investment. I am assuming that a lower rate will reduce savings and thus bring savings in line with investment. But if a lower interest rate actually increases savings, then we can never get to equilibrium. Diversification will encourage outbound flows, but my assumption is that inbound flows plus borrowings will more than offset that effect and thus bring China's higher rates closer to global norms. Past experience has shown that eliminating financial liberalization normally leads to higher rates in the near term but eventually rates fall as equilibrium is established.

Lowering interest rates to help China is a little like saying the best way to help an alcoholic get over the pains associated with withdrawal is to give him another bottle of vodka. It certainly will help him get over the DTs, but it will only make the ultimate withdrawal much more painful (if it doesn't kill him first).

I disagree with Mr. Huang. Michael Pettis has more than anyone else explained the Chinese growth story and the role of interest rate repression. The assumption that lower interest rates will reduce savings is based, as Pettis has explained, on a misunderstanding of the structure of China’s financial system. Huang thinks that whatever is true in the US must be true in China, even when the evidence is the opposite. High deposit rates usually increase savings in the US, but China savings rates are not high because the yield on deposits is so high that Chinese eagerly save. In fact they have been negative for most of the past fifteen years even as Chinese savings soared to the highest in the world. That should have at least puzzled Mr. Huang.
Chinese savings are high because the yields are so low that they have forced household income and household consumption to extremely low levels, which is the same thing as saying that they forced up the savings rate.
Lowering the deposit rate might reduce the household savings rate, but it will also lower household consumption even more and so the national savings rates will rise. The IMF tested the Pettis hypothesis and found it to be true. Higher deposit rates, they found, are associated with lower, not higher, savings.
So Huang’s solution will cause even higher savings and lower consumption, and even higher malinvestment. His recommendation is to make all of China’s fundamental problems much worse. Great idea, but only if you are hoping for a Chinese crisis.

The Fed has better tools than yield curve control