At the start of 2014, we noted that global cyclical forces were likely to be favorable for China’s efforts to push forward reform efforts in capital account and currency policy. We, as did many analysts who follow China’s currency policy closely, believed that 2014 would be turning point where Beijing incrementally slackened its control over the renminbi and made progress on capital account opening. Indeed, 2014 could well be the year that China’s policy of heavy intervention and reserve accumulation ended. As we and many other analysts noted, this policy was becoming increasingly difficult and expensive to maintain and judging from the statements by several high-ranking officials at the PBoC and SAFE, they agreed. However, the commitment from Zhongnanhai at the beginning of the year was less hopeful.

In Li Keqiang’s speech early in 2014 outlining the year’s reform priorities, currency and capital account reform received conspicuously low priority. Furthermore, the start of the year saw reserve accumulation sally forth unabated. In late February, however, the PBoC surprised exuberant market expectations by depreciating the official rate – which for some time had been consistently appreciating – and by reportedly intervening directly in the foreign exchange market. This official action, combined with a deteriorating trade balance and slow-down in investment, caused genuine concern about the trajectory of the Chinese currency.

Possibly taking advantage of this uncertainty, the PBoC widened the daily trading band to +/- 2% from +/- 1%. As we noted in a previous post however, as long as Beijing retains complete discretion to set the fixing rate, this policy change by itself does little to liberalize the currency. On the other hand, Beijing is engaging in other efforts to increase the ‘market’s role’ in determining the value of the currency. In late December 2014 SAFE announced that it had removed the limits on banks’ FX exposure as well as streamlined sundry regulations on the domestic FX market. As state banks were already exempted from this restriction and the appetite for short FX positions seems to be limited at the moment, the actual impact of this announcement will likely be small. It is a good signal however that the government is more comfortable with the functioning of the FX market.

RQFII[1] quotas of RMB 250 billion ($42 billion) were awarded in 2014 and several billion more, with countries such as Canada and Australia, approved. QFII[2] quotas worth $37 billion, up from an accumulated total of just $30 billion at the end of 2013, were awarded to foreign institutional investors. In the other direction, SAFE awarded $31 billion in new quotas under the QDII[3] program for domestic institutional investors. Additionally, the PBoC issued more clarification on the RMB outbound direct investment scheme (RQDII[4]) in November, as well as plans for the individual outbound investment scheme (QDII2).

It should be noted that the values of these investment schemes are merely quotas, and actual usage thereof has varied. Furthermore, while these quota increases are large on a percent change basis, they are still small relative to GDP (<10%)[5].

In addition to the direct investment schemes, a bilateral equity market investment scheme between Hong Kong and Shanghai (HK-SH Connect), whose inbound quota is worth RMB 300 billion, was announced in April and has been implemented as of November. The initial uptake has been disappointing (see exhibit 1), especially from Chinese investors investing in Hong Kong. This is has reportedly been due to several administrative difficulties allowing foreign fund managers to participate. However, beyond these initial roadblocks, the HK-SH Connect scheme, as well as the Shenzhen Connect which is widely expected later in 2015, should help bring China’s heretofore relatively uncorrelated equity market more in sync with the global cycle and provide Chinese investors with increased investment diversity.

Finally, although the State Council initially indicated that Shanghai Free Trade Zone (FTZ) would allow for renminbi convertibility, though this has yet to be realized. However, the government has reiterated is commitment to the FTZ and has announced plans to open three more in Guangdong, Fujian, and Tianjin. 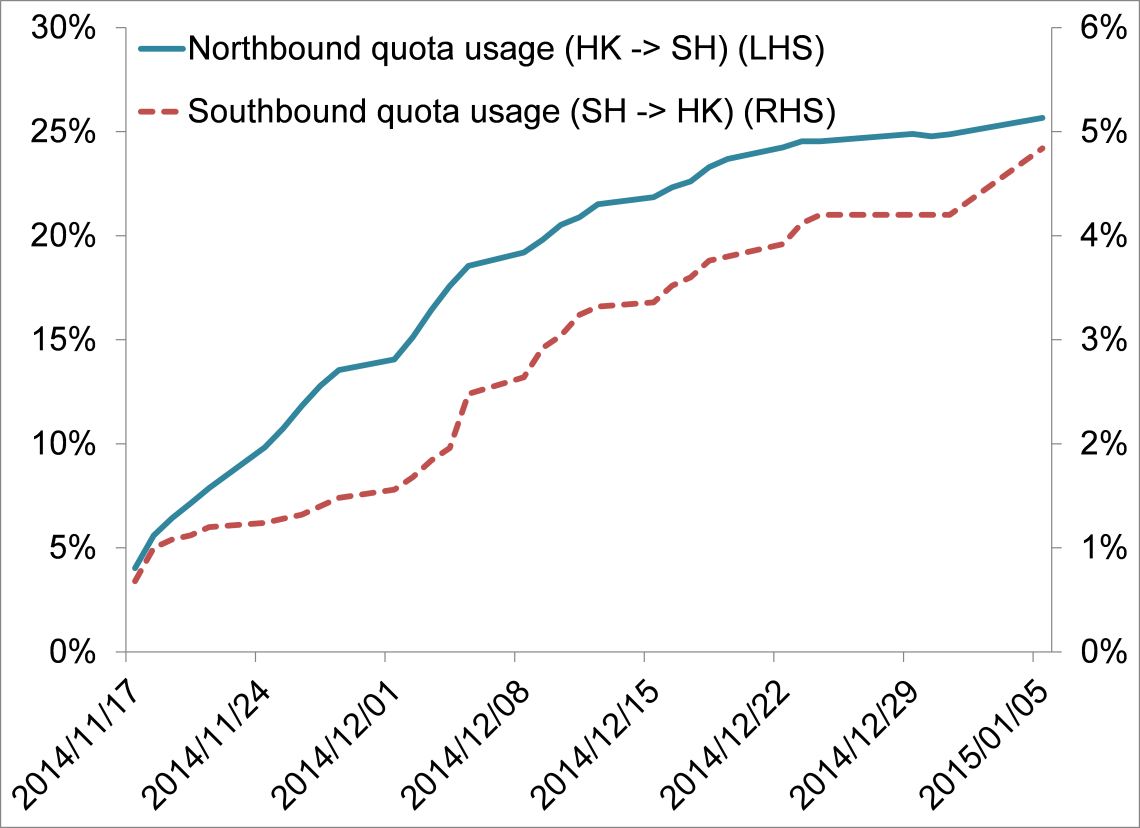 2014 has ostensibly been a relatively successful year, not only for China’s narrow goal of increasing usage of the RMB abroad, but also China’s influence in international finance. China opened two new RMB centers in Europe and one in Korea. London and Frankfurt will handle trade invoicing and will act as the clearing center for RMB-based investments. In Korea, the establishment of the offshore trading center will increase Beijing’s already notable influence on Korea’s economy (see previous post). China also announced the founding of the new Asian Infrastructure Investment Bank which may rival other international institutions such as the World Bank. The U.S., for its part, has abstained from joining the bank.

Additionally, China has lent critical financial assistance to Afghanistan, Argentina, Venezuela, and perhaps in the future, to Russia. In the case of Argentina, this aid largely came in the form of currency swaps between the PBoC and Argentine central bank. This effectively allows Argentine importers to exchange local currency directly for CNY, whereas they would otherwise need to use dollars which are in short supply. According to press reports, the potential financial assistance to Russia could take the same form. While it is unlikely to alleviate Russia’s or Argentina’s financial challenges, at least for bilateral trade, these arrangements would increase the use of the RMB.

As we outlined in our May 2014 policy brief, China’s offshore RMB assets stand at around $300 billion, while total RMB debt and equity assets are less than 1% of global total (the US share stands at around half of global total). Although the opening of these offshore centers is unlikely to result in a material shift in the RMB’s global position into a “reserve currency” that challenges the US dollar, it will increase global exposure to the RMB and make it more difficult for China to return to its previous interventionist regime.

At the start of the year, China’s rate of reserve accumulation continued at a pace similar to that observed in 2013. As of the third quarter reserves were up by $60 billion (to a total of $3.88 trillion), most of which occurred in the first quarter. Since then reserves have risen by a small amount and the monthly banking foreign exchange holdings data would suggest that has continued into the fourth quarter (see exhibit 3 and previous post for details). Holdings of US assets have remained steady throughout the year, even declining slightly, and stand at around $1.81 trillion. As of October, holdings of treasuries are down by nearly $20 billion. Far from dumping treasury bonds, the pace of decumulation appears in line with a decrease in intervention activity and a continuation of their diversification trend (see exhibit 4 and previous post for details). While the PBoC may not be the source of marginal demand for treasuries that it used to be, as China continues to introduce ways for domestic investors to invest abroad, in the longer-run China’s private investors may well make up that difference and more. We would look for this to be manifest across asset classes, including a greater demand for US equities (as Chinese individual investors will likely have higher risk tolerance than official reserve managers)[6].

Data on China’s reserve allocation to other markets is not as readily available. As we detailed in a previous post, so far as available data show, since 2010 China has been diversifying its reserves into non-USD assets, principally Japanese, Korean, and European markets. In large part, the lag in data availability does not an evaluation of these trends for 2014. However in 2013, according to data from the IMF’s CPIS database, China’s stock of portfolio investment in Japan has nearly halved (to $166b from $285b in 2012) and more than halved in percentage terms (to 4.2% of reserves from 8.6%). China’s total portfolio investment in Korea increased by 26% in 2013 and 21% in 2014, but still constitutes just 0.5% of total reserves. 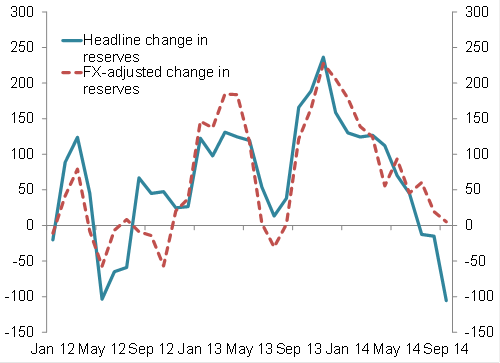 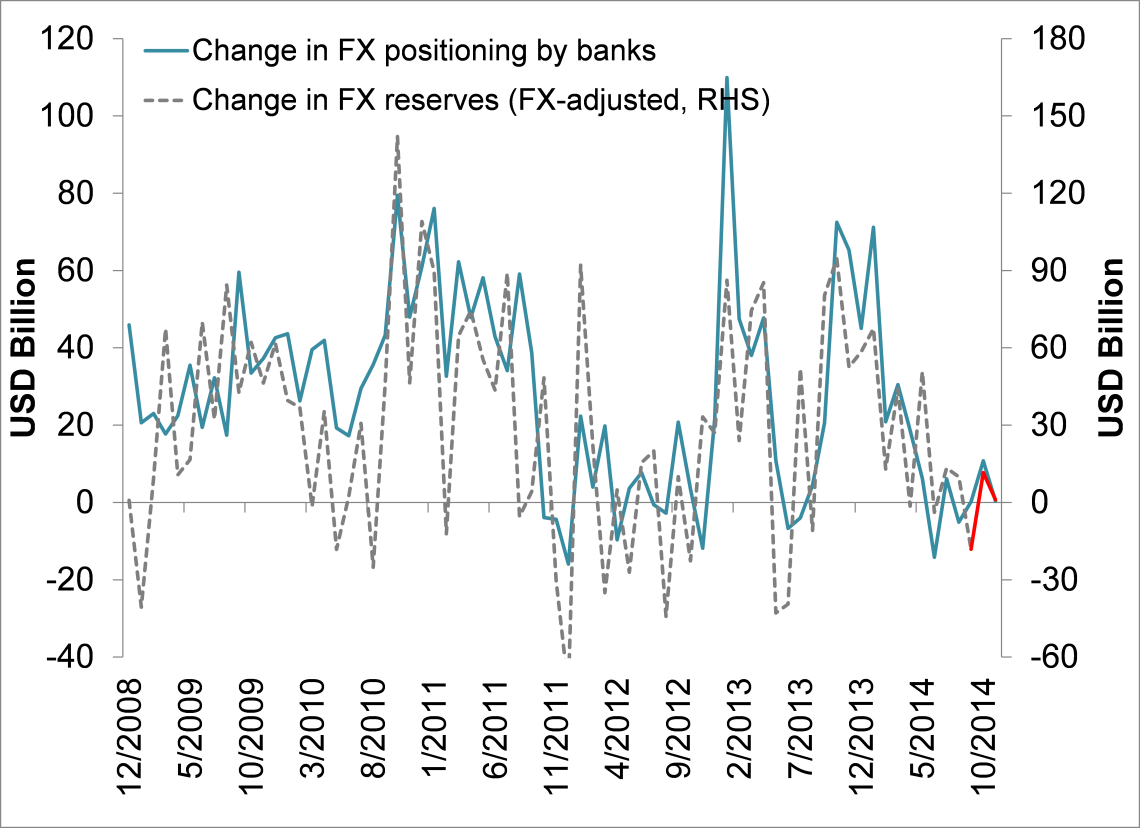 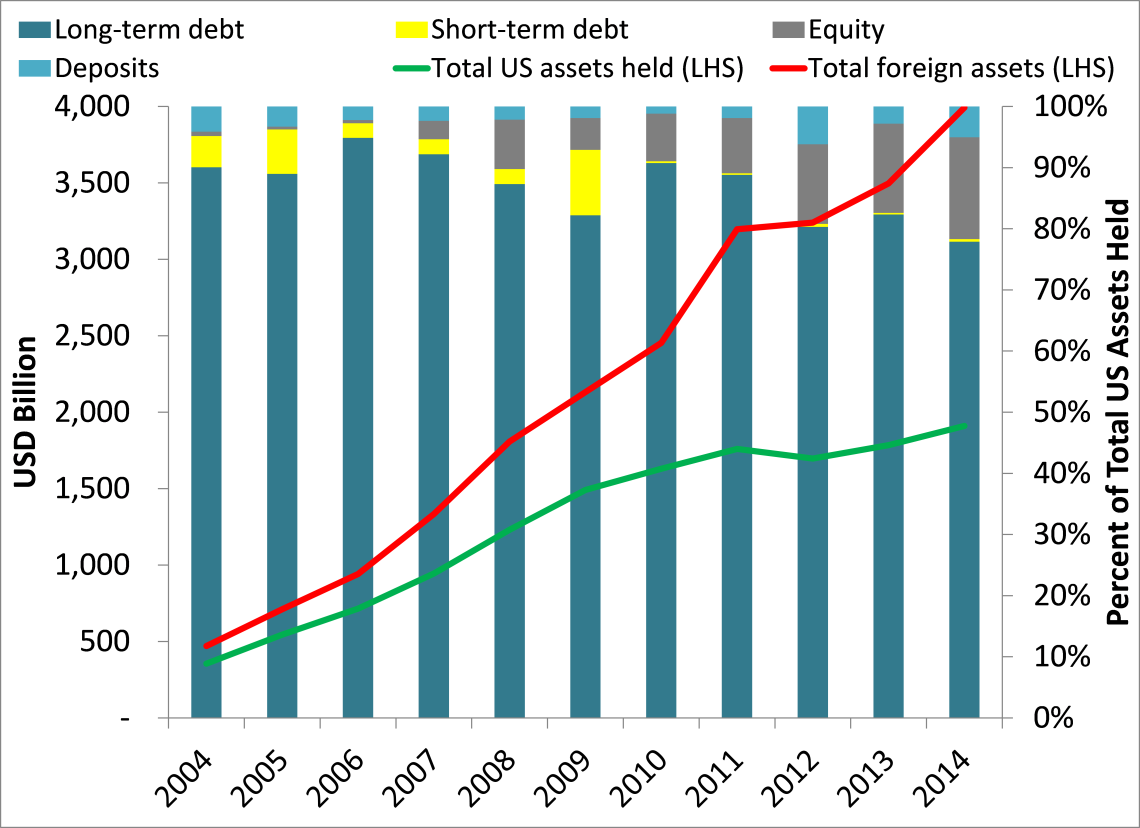 Investors, chastened in the beginning of the year by the PBoC’s actions, increasing macro concerns, and US dollar secular strength, do not appear as certain about the RMB’s appreciation against the US dollar as previously thought. As we pointed out in a previous post, the RMB has been a remarkably profitable trade in risk-adjusted terms. However after widening the trading band in March the RMB has traded on average weaker than the official market fixing, a strong indication of the market’s saturnine expectations. In fact, in a very rare occurrence the two rates have been moving in opposite directions for the past month or two (see exhibit 6), with the fixing rate appreciating while the market rate pushes the weak-side boundaries of the trading band.

To be sure, this could be partially due to the secular strength of the USD of late as much as doubts about the appreciation prospects of the RMB. In exhibit 7, we show the trade weighted RMB and the nominal rate versus the dollar. In the fourth quarter of 2014 the USD appreciated strongly against the broad index of currencies on the back of divergent G3 monetary policy and safe haven flows. This takes marginal appreciation pressure off the RMB. 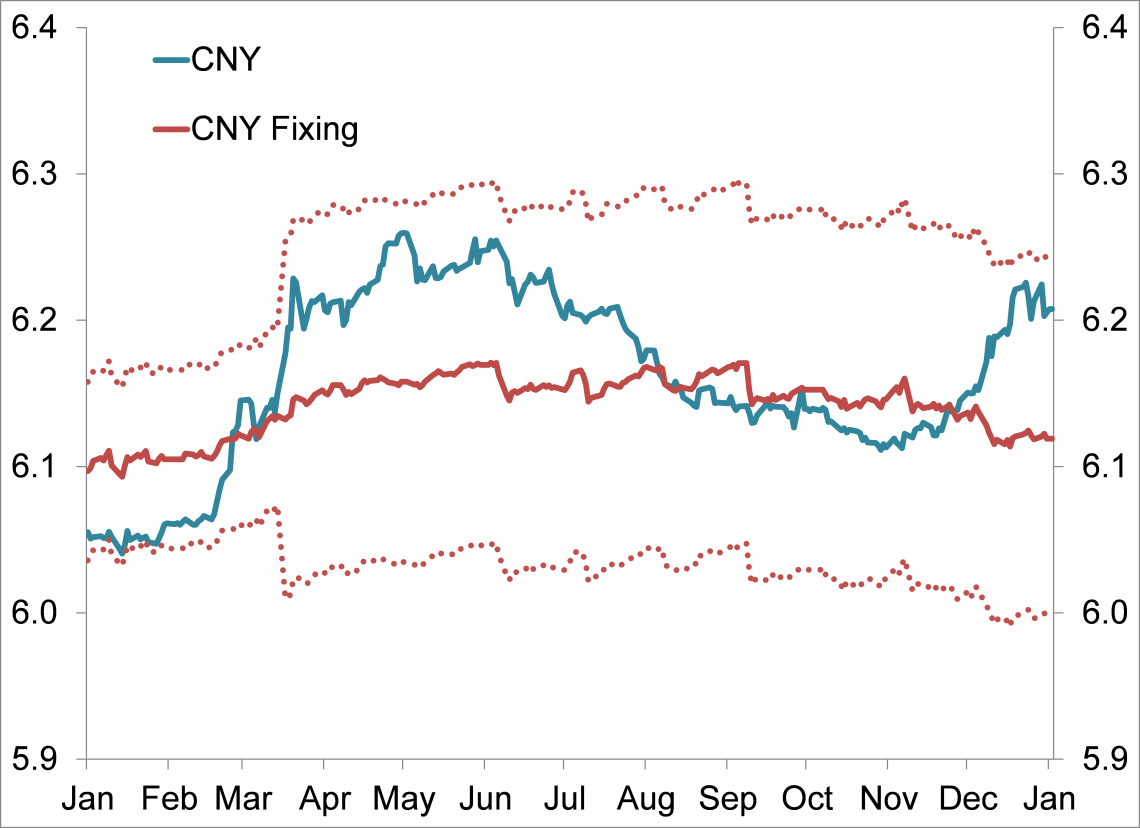 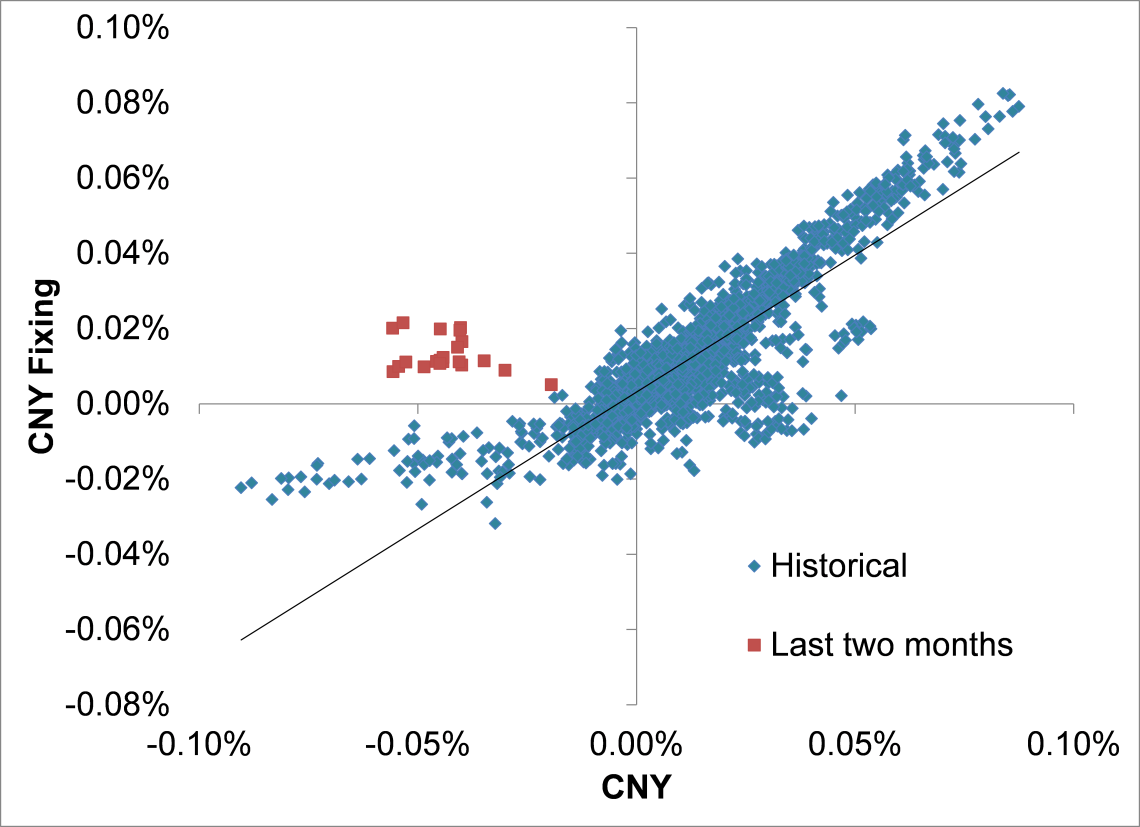 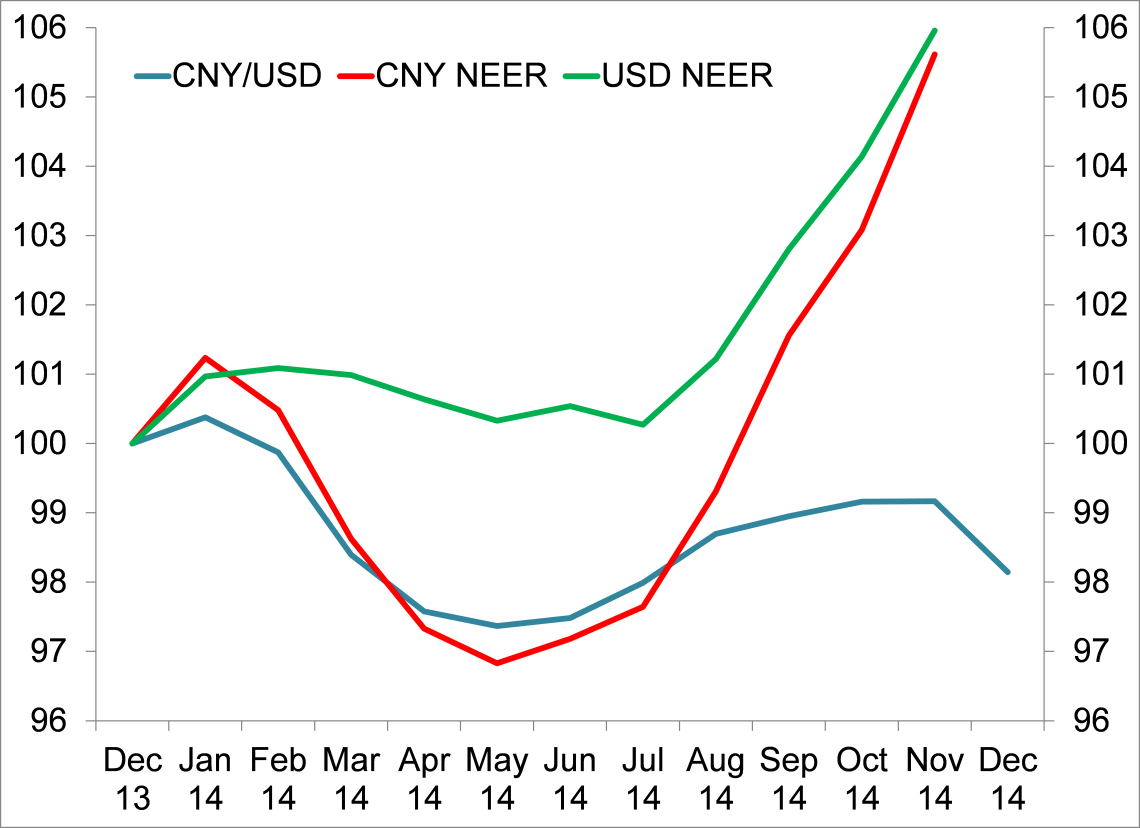 The beginning of 2015 will be an interesting time for the RMB. With the renminbi touching the weak side of the 2% trading band and the USD moving from strength to strength, the PBoC may have to choose to: 1/ strengthen the rmb by selling USD, 2/ weaken the fixing rate, or 3/ widen the trading band. They may choose all three to some extent. However, we believe that if current sentiment continues, it is not unlikely that another widening of the trading band could be in the offing.

Finally, we are looking for more clarification of size and timeline of the RQDII and QDII2 schemes which will allow further outbound investment. Allowing more individuals (either directly via the QDII2 or indirectly via the R/QDII) to diversify into foreign assets will help stem endemic malinvestment.

[4] RQDII: (人民币合格境内机构投资者) a separate but similar scheme, only using renminbi.

[6] For a cogent analysis of the impact of future private Chinese capital flows, see Karolyi, Ng, and Prasad (IMF 2013)

[7] US assets are for June of each year, from the annual TIC survey. For June 2014, we use the SLT survey. See our previous post for details. Note that June 2014 was the peak of China’s reserves ($3993 bln) which have subsequently declined.

Dollar not so dominant: Dollar invoicing has only a small effect on trade prices